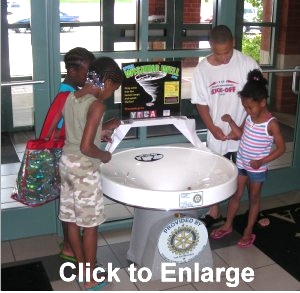 [YOUR CITY]–The [ORGANIZATION NAME] has made a Spiral Wishing Well available to loan to local charities, schools, churches and other groups for fund raising events. Spiral Wishing Wells have raised millions of dollars over the years for many organizations around the world, and some of the largest amounts have been raised at one-day or weekend events. The current one-day record is $40,979 at a church in California. Common results are several hundred, or a thousand or more dollars in a day with the Wishing Wells with contests and interactive games with the coins.

Children (and adults) like to watch the coins spin around the vortex-shaped funnel, gaining speed and seeming to defy the laws of gravity as they hug the side-walls without falling over. Steve Divnick, inventor and manufacturer of the devices observes, “Spiral Wishing Wells bring a focus to events, and give the organizers a chance to encourage everyone to bring all the loose coins in their home to the event. There is over $10 billion worth of coins sitting on America’s dressers and under seat cushions. These events get some of that money moving.” You can see pictures and read more about Wells placed around the world at www.spiralwishingwells.com.

While most Wells are placed in permanent locations such as stores and restaurants where they raise daily money for the host’s charity, or in museums, zoos, and libraries where they raise money for that facility, one-day events can generate many times those amounts because of the ability to promote the event.

In addition to the coin revenue, event organizers can raise additional amounts by providing the small mini-well toy banks to the attendees. The Vortx® toys are great for show-and-tell, birthdays, and Christmas gifts for children.

[Your name and title] says, Spiral Wishing Wells are too expensive to purchase for a one-day event, so it is our pleasure to make a Well available to other groups in this community for local fundraising.”