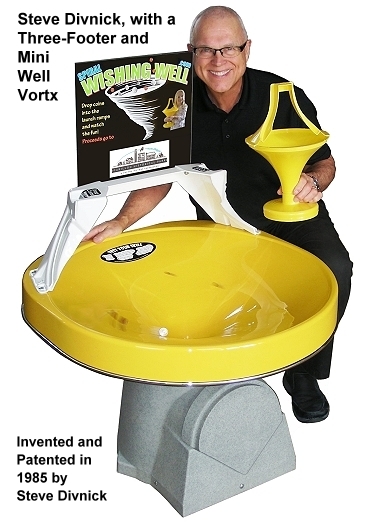 The original Spiral Wishing Well and Vortx Mini-Wells were invented, and patented by Steve Divnick, President of Divnick International, Inc. in 1985. The first design patent was issued in 1986 with a utility patent issued in 1988. A new utility patent was issued in 2010 for various improvements, including the coin launch ramps being mounted OUTSIDE the perimeter of the funnel. This provides many benefits which are described below.

The first Well was designed as a children's offering device for Divnick's church, and it quickly became an effective fund-raising device at charity events in the Dayton Ohio area. The first commercial sale was to the Dayton Air Force Museum where its Well has raised over $2 million so far. Museums, Zoos, Planetariums and other public locations from around the world quickly followed.

Within a few short months, Wells were being sold to all types of stores and restaurants throughout the United States and several other countries where they raised money for the host's charity. Since that time, thousands of Wells have been sold that have generated over $1 billion for charities throughout the world, growing by millions of dollars every year.

It has been our pleasure to be a part of such a tremendous product that has had a lasting impact on society...raising money for school projects, blind children's summer camps, hunger relief, water wells in 3rd world countries, church missions, small local organizations, service clubs, libraries, museums, zoos, large well-known organizations, and life-saving transplants.

You can review our patents on the following links which will open in a new browser window:

The latest patent (7,704,118) issued in 2010 covers several engineering improvements over our initial patents, including the launch ramps being mounted OUTSIDE the funnel which results in the coins being able to circle the entire funnel. The older models mounted the ramps inside the rim, so the coins had to launch on a path to miss the ramp on the opposite side, reducing the effective coin-rolling diameter by about 12" per side.

Click here to see pictures of our past models, improvements over the years, and how the new models generate even more revenue.